Malik Gita: “Ghetto” – between the streets and the mainstream!

NBL ENTERTAINMENT is an American artist owned label operated out of South Africa, under the leadership of Malik Gita, a South African native, and Magikel, an American rapper based...

NBL ENTERTAINMENT is an American artist owned label operated out of South Africa, under the leadership of Malik Gita, a South African native, and Magikel, an American rapper based in Dubai. After spending his teen years in California and 6 years in the United States Marine Corps, Malik returned to his roots in South Africa where he now delivers his artistic fusion of Kasi (South African Street Culture) and other multicultural experiences. Born to the Kullid community of Eersterust in Pretoria, South Africa, Malik’s motto is: “It’s about the journey not the destination.” With his, hot off the press EP, “The Kasi Mixtape Vol. 1”, having been just released, Malik enhances the listener experience with the single, “Ghetto”.

Malik Gita’s flow is the high-water mark of hip-hop lyricism. His delivery is always captivating in its breathlessness; his timbre is glaringly smooth and polished and never in contrast to his startlingly clever rhymes and imagery. The lyrics are all terrific on “Ghetto” the beat, even more so.

All of which congeals the track into a gorgeous whole even greater than the sum of its brilliant parts. Often, the sheer power of Malik’s storytelling threatens to relegate the music to second place. His insights and observations concerning the struggles of generation can be read from his lyrics sheet as pure prose. When backed by the sonic collages of the production, the signature combustion is truly his own.

Perfectly perched between the streets and the mainstream “Ghetto” has no need to fight for acceptance and credibility. Its message of “overcoming poverty and misfortune through willpower and ambition”, fluidly and convincingly reaches out toward the people. 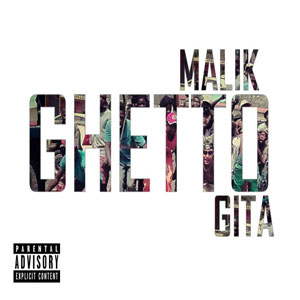 Forget the braggadocio and the mindless thug banter that seems to have infected every major hip-hop artist; Malik Gita wrestles with the issues at the core of life, in places like the ghetto.

This dedication to his craft will certainly assist him in clawing his way into hip-hop’s most elite circles of lyricism. Any doubters should check out “The Kasi Mixtape Vol. 1” project. Through his verses you can sense and visualize the actions being taken, which is a pure sign of a great storyteller.

Malik Gita is a true poet on a mission, and you can really tell by listening to some of the cuts off this debut EP. You’ll start to recognize his talent and appreciate his contribution to the entire hip-hop world.

The man has heart, and it really shows in his songs. Like all great works of art, “Ghetto” isn’t just about the powerful story it tells; it provides us with a fully-fledged character study of the socially conscious genius behind it.

Emmanuel Dalmas is a natural songwriter!

Jaded Productions: “Until It’s Gone” & “Eye Of The Storm”