YLN Prodigy: “Time To Run It Up” – an emerging artist aiming for his shot

Corey Brookins Jr., known as YLN Prodigy, is an American rapper, song writer, and producer. YLN (meaning wildin) was born in Detroit MI as the only child to his...

Corey Brookins Jr., known as YLN Prodigy, is an American rapper, song writer, and producer. YLN (meaning wildin) was born in Detroit MI as the only child to his mother Linda Moton, who noticed at the age of 2 that he could dance. YLN who also had a strong vocabulary as a child, is now a fifteen year old self-taught drummer and keyboardist. He also sings and enjoys Brazilian mixed martial arts. Currently looking to get a record deal YLN Prodigy dropped his first song, entitled “Time To Run It Up”.

Audio and Video streaming platforms like YouTube and Soundcloud are showing no signs of releasing their grip on rap and Hip-hop. As a way to share music for young rappers and producers it’s completely unmatched, and just a quick look across the most played tracks in the USA reveals all you need to know: it’s all rap, mostly from artists who don’t even remember a time without file sharing.

YLN Prodigy is the perfect example of a contemporary rap landscape where teenagers can forge their way from obscurity to sensation within a couple of days. The new wave of rap music was firmly established in the past years with the rise of artists like Future, A$AP Rocky, Young Thug, Travis Scott, and Lil Uzi Vert, hence artists like YLN Prodigy have every right to work their grind and find momentum. The Motor City is not necessarily a mecca when it comes to hip-hop, however, it is home to several big names in rap, which again plays in favor of YLN’s aspirations. 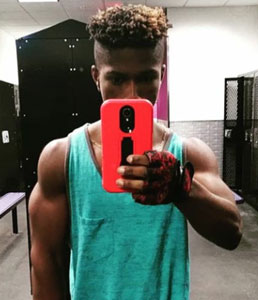 The production on the single is up-beat and hard-hitting with a booming bassline. It’s raw, unpolished and dynamic and allows for YLN to display his broad musicality, with a richness of sound. It has a dark and somewhat experimental feel, while YLN Prodigy brings intelligence and technical prowess to each rhyme.

His voice full and rich tone truly belies his age. While some young rappers prefer to stunt and big-up their ego on a record, or glorify the street life many of them haven’t even lived yet, YLN doesn’t— as he seems to keep it real.

This being his first release means that YLN Prodigy will still be looking to find his most comfortable niche and lane. Something that will be a natural progression with each subsequent release.

With so many artists bubbling—on the web, through the grassroots, or on the back of a celebrity endorsement—it’s tough standout right now. The young generation is facing more of an uphill climb as they traverse the new social web and try to remember to make music that matters, too.

But there is hope, as some artists will have what it takes to sustain, regardless of the misfires and missteps. YLN Prodigy aspires to be on that list as he is one of the young emerging artists aiming for their shot.

Lyndon Rivers: “Where Are You Going” smashes it!

Eli Destroy: “For The Better” – A Breath of Fresh Air