The mix of Soul, R&B, and Trap influences offered On Mike Ray’s latest EP release, “February” is daring, and the songwriting oscillates smartly between the confident bedroom entreaties and...

The mix of Soul, R&B, and Trap influences offered On Mike Ray’s latest EP release, “February” is daring, and the songwriting oscillates smartly between the confident bedroom entreaties and the introspective heart-beating autobiographies. These days, Mike is a world-class independent singer-songwriter who somehow is still underrated, and who probably deserves to sell a thousand times as many records as he does when you factor in his raw talent. Like his previous release, this EP continues to let his craft do the talking.  He revels in the sexy hyperbole, and combines his wry lyricism and euphoric platitudes over syrupy and languid songs. He is often his own music’s best feature, multi-layering husky hooks and soulful exclamations to great and endearing effect.

“February” is an EP with a generous helping of highlights, not least because of Mike Ray’s enviable vocal versatility and affinity for dramatic song craft. Over caressed chords and warm harmonies, on “Cry4U”, Mike’s voice is to the ears what a milkshake is to taste buds.

The production is building and swirling, while the keys are lovely, soft and ambient over a dominant bassline. “Reassurance” is melancholic but heartwarming music. I’m pretty sure this song should to be played on a private island at midnight where summer is everlasting and the aphrodisiacs are bountiful. His ready. She may be. All it takes is a little reassurance.

On the sensual “Guard Down” Mike hits all the right notes and strikes all the right chords. This is where you start to appreciate his brand of love songs. He’s like Hallmark—able to say all the right words but not sound cheesy. He leaves no corner of the song empty. Each space is being filled with something – an instrumental or a voice.

Though the music celebrates physical acts of love, it’s not degrading or obscene — it’s just romantic. The bassline on “Soft Lips” is intoxicating, truly chill, while Mike’s voice is almost angelic. The two feel as if they are meant to boom and shimmer together, in a harmonious duet. It’s a near-perfect match between a slippery wooziness and the studio craftsmanship that would befit an R&B star. 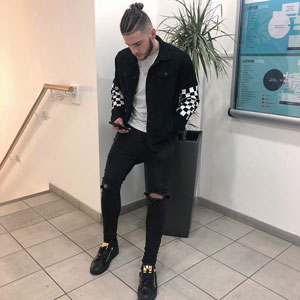 Mike Ray is an original. It’s a quality that becomes rare in an age where copying is a normal approach. As long as he continues to put his spin on R&B, Soul, and Trap, there will be an audience hungry for his material. With popular singers frequently getting pigeonholed into one genre, there seems to be a deeply ingrained misconception about what R&B actually is.

Artists like Frank Ocean and SZA have long since progressed into new territories of experimental pop, yet the media often labels them unequivocally as R&B singers. The artists who actually fall under the R&B genre, on the other hand, have devolved into stale one-sided formulas. In this rapidly blurring and divisive genres, Mike Ray stands as a breath of fresh air in the urban music arena.

MORE ABOUT: Currently a Birmingham City University student, 21 year-old Mike Ray moved to Coventry (UK) from Lubartów (Poland) at a very early age. His mom being a singer, and his dad a pianist, Mike was exposed to music from an early age, drawing his personal influences from the suburban areas where he grew up. This inevitably led to the hip-hop and rap genres where TI, Lil Wayne and Kanye West made an impression on him, but wasn’t until he heard Big Sean record ‘Memories’ that he was inspired to create his own music. Hence at 17 he formed a collaboration with school friends Lecs Blvck and IamTerrier, eventually releasing the track “ßOUNC£” which gained attention in various parts of the country and made its way to the radio stations. Live performances soon followed and the collaboration morphed into a group called RIOS MOB.