After having listened to her songs, Magneto Dayo contacted Maini Sorri on Twitter, with the desire to do a track together. They ended up putting together a 10 track...

After having listened to her songs, Magneto Dayo contacted Maini Sorri on Twitter, with the desire to do a track together. They ended up putting together a 10 track album, “When Two Worlds Meet”, released via the Reya Music Label, and winning the Arzuk Music Award 2017 in the Best Hip-Hop/Freestyle category. Maini Sorri is a Swedish-Finnish singer, musician and songwriter living in Sweden. She has studied piano, music theory and composing, with her qualifications including a Bachelor of Arts degree. Maini’s discography contains 3 albums, 3 extended plays and 19 singles, in pop, dance, electronica, and rock category. The singles, “Blue Song” (2014) and “Second Chance” (2016) are collaborations with Magneto Dayo, and are included on the new album, along with “Lost Love” co-produced by Brian Lanese and Orlando Mestre from Grammy nominated LA-band, Permanent Ability. The instrumental is by Orlando Mestre.

Dashawn Williams, better known by his stage name Magneto Dayo, is an American rapper from Brooklyn, New York. He is also part of a ghostwriter team who have written songs for some of today’s top artists in rap, hiphop, and R&B. Besides his collaborations with Swedish-Finnish singer Maini Sorri, Dayo is also known for his VHS retro and S i m p s o n w a v e videos. He was one of the most promising new artists on Pandora radio 2015, with almost a million radio plays during the first month.

Some artists or albums can hit you so hard on a personal level that you can’t help but fall for them at first listen. Such is my liaison with Maini Sorri. Maini’s voice is such that it blends perfectly with the many varied instrumentation of her compositions.

She sounds sincere in a manner that travels the listener right into the scene of the tale she narrates. Her musical flavors can transport you all over the world. Most of all though, her work is introspective; by listening to her music, one can view life from a different perspective.

Maini has been dazzling the devotees of a host of musical styles for many years. With her breathtaking synthesis of Pop, Rock, and Electronic music, she has enthralled many, and now on “When Two Worlds Meet”, she takes her airy angelic voice deep into urban music territory. 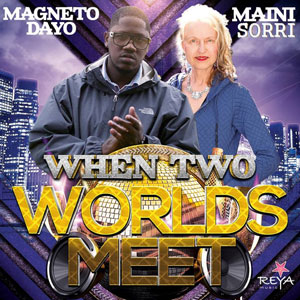 And the impact is the equivalent of picturing Enya or Bjork singing on a set of rap or hip-hop songs. At first it’s hard to imagine, and even on the first listen, you’ll need to customize your perceptions, and acquaint yourself with the opposing styles forged by Maini and Magneto across these tracks.

He’s hard, she’s soft. He’s tough, she’s gentle. He gets down, she moves up. He’s the earth, she’s the sky. Together they represent the Yin and Yang in every song, completely confirming the theory of how seemingly opposite or contrary forces may actually be complementary, interconnected, and interdependent, and how they may give rise to each other as they interrelate to one another.

Maini sings sweet melody lines with the elegance of a sea nymph, while Magneto releases a stream of consciousness with his streetwise wordplay, attractive rhyme schemes and smooth vocal flow.

Prime examples of their delicious deliveries come in the form of standouts; the upbeat “Blue Song”, the dancefloor banger “Shiny Eyes”, the languid and haunting title track “When Two Worlds Meet”, the rock-influenced “Please Go Away” and “Oh Echo”.

This is an album built to be consumed with as many speakers as your room can hold – the beats, the voices, the atmosphere and overall beauty overwhelming your senses and painting lush rhythmic landscapes in your mind. If the loose term “world music” ever held any meaning, it is exemplified in the global sound that Maini Sorri & Magneto Dayo create here from varying styles.