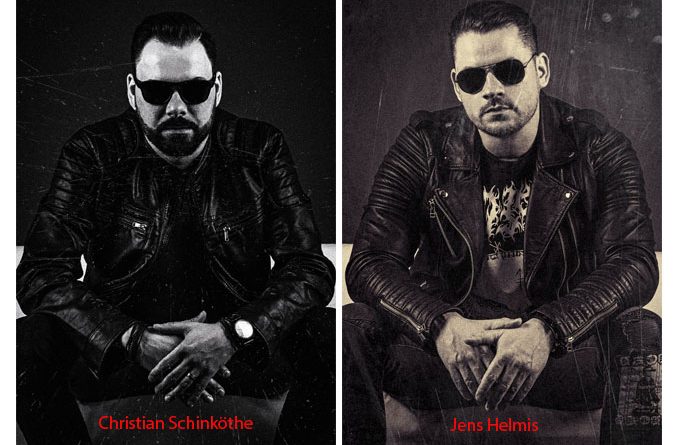 The Germany-based duo Jens Helmis & Christian Schinköthe, form the dark Electronic-Rock inspired project CATTAC. They have released a 10 track demo album entitled “Dead Like Me” to expand their horizons and show off their wares in search of a serious label, live gigs and support. CATTAC has a sound and tone that is like a language unto itself, and the lyrics animated by that tone only verify the degree of soul and sentiment embodied within it. The two absolutely define each other. If you’re looking for that deep foreboding vocal tones backed by thick crunching layers of resonating synths and momentum moving drums, then CATTAC knock it out of the park on this recording. They don’t just transcend the park though, they redefine it on “Dead Like Me”.

There’s a brilliance in both the subtlety and the viscerality of this album – a balance, a full circled maturity in every sense implementing all of the duo’s best creative and performing elements. There is a polish, a verifiable audible shine to the mixes.

There is no excess at any point, to one extent or the other, but a sound of pure soul channeled to perfection. Its electronic-rock, sometimes on the border of Goth and industrial perhaps, but it’s never heavy – just tenebrous and gritty. Something you can pick up right from the ominous opening track “Cannot Stop”.

The tracks sweep you up with the beat, while the vocals lock you into the atmosphere. The music and the vocals play together in a great symbiosis. And nowhere do they do this better than on the title track, “Dead Like Me”.

To find an electronic-rock band that provides great music with a fantastic sense of affective linkage to your soul is the goal of any serious electronica music enthusiast. CATTAC deliver it in bucket loads with this track. Prepare for proactive synapse overload forcing your body to move with the crafted, emphatic beat and Jens Helmis’ portentous lead vocal.

Put on some headphones and crank the volume up to hear the amazing detail they put into this song. On “Driven”, CATTAC keep the momentum going as the soundscape becomes stunningly beautiful between break downs and buildups, before the duo swing into the upbeat “Hold On Your Souls”.

The moment of rhythmic beauty increases in scale and magnitude to the point where emotions are provoked on “Don’t Say I Should Live On”.  The album’s apex is reached on fully chanting anthem, “The Suicider”.

The lead vocals break into a scream while the beat is remarkably deep, permeating every inch of the eardrums; it is loud and powerful enough to transform an ordinary room into a concert arena. This effect is further bolstered by the layered vocals which provide thick, gorgeous melodies that will stick inside your head.

“Solitude Of The Night” exudes a dark presence with the vocals often sounding tinged with sorrow. Bold without too much effort, Jens Helmis obviously prefers the lower register. “Why Do You Fear” forges another display of driving rhythm and catchy synth hooks by keyboardist Christian Schinköthe which harmonize along with the vocals.

By the time you hit play on the melodic “One Of These Nights”, you take stock of how strong the songwriting is. Across the entire album, CATTAC consistently create excellent music. They do not stumble once, which confirms that their talent is extraordinary.

The album closes with the cinematically epic “And The Darkness Fills The Sky”. The wonderful opening to this song promises something strong, and it doesn’t disappoint, turning out to be gutwrenchingly powerful arrangement with deviously smart interludes.

Overall the music is multi-layered and has very high production values on “Dead Like Me”. The vocals, percussion, melodies and harmonies have been implemented with well throughout arrangements. This is a beautifully dark, but sweeping, well-constructed electronica album.