Engaging, dynamic, a dense and detailed soundscape, great musicianship, with the added benefit of intelligent, interesting lyrics and, of course, the voice of Americana songwriter Amilia K Spicer. That’s what you’ll... 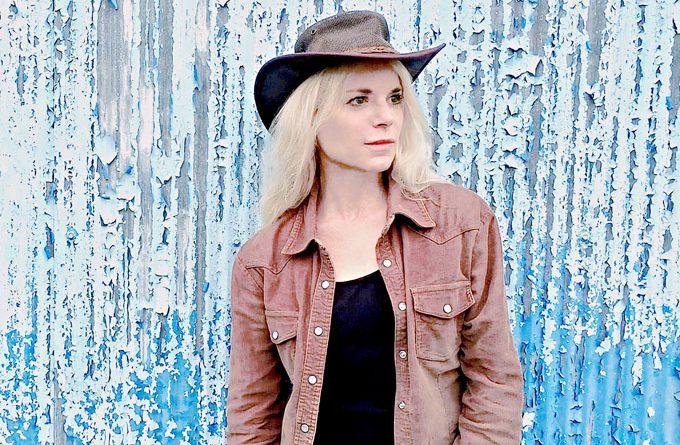 Engaging, dynamic, a dense and detailed soundscape, great musicianship, with the added benefit of intelligent, interesting lyrics and, of course, the voice of Americana songwriter Amilia K Spicer. That’s what you’ll find on the new single and video, “Harlan”, the third track lifted off the album, “Wow and Flutter.” The track signals Spicer’s third foray into directing music videos for this album. Once again producing and filming it with production partner, Edward Romero.  The video traces Spicer’s personal journey to the birthplace of her father.  When Spicer traveled to Harlan to film the music video, she searched for her father’s home, only to find a mostly barren lot at the address. “I wandered around,” Spicer recalls, “and noticed something shiny in the dirt. Turned out to be several pieces of coal, which I now have. Sometimes a lump of coal is a beautiful gift.”

Amilia K Spicer writes as if she is not bound by simple conventions of song craft – just like her memories – tempos fluctuate, melodies shapeshift, verses unfold and choruses are elusive, and sometimes expendable. Therein lies the beauty of Spicer’s music, both on “Harlan”, and everything that’s come before.

She’s like no one else, with an artistic vision that’s deeply rooted and clearly focused, and a deeply honest compositional spirit that runs laps around most of her contemporaries. As a result, her catalog overflows with authentic and emotional songs that feel comforting and familiar. In short, “Harlan” is the sound of one of the most interesting, independent, and consistently brilliant artists in her genre, recording today, at the top of their game.

“Harlan” is a hypnotic, evocative tale that takes several listens to weave its aural magic into your consciousness. But once it bites in, you can’t let it go. Her lyrics are almost like anecdotes to hang thoughts on: concrete enough to set the scene, yet loose enough to allow your own inflections and interpretations in.

Bound to the organic instrumentation and production values, the piece becomes a haunting poem. Spicer creates music and lyrics that touch the soul of anyone who listens to her. And she is in typically phenomenal voice throughout the record. Such is Spicer skill with words and her expressiveness of voice that canyons of emotion and epic narrative are crammed into single lines.

Being both attractive and talented, Amilia K Spicer is difficult to resist in any setting; her rich, clear-throated voice would be a pleasure to behold even with the worst of cacophonies accompanying her. The single and video of “Harlan” is a confirmation and deepening of everything Spicer has been exploring over the last few years, and she has never sounded quite so compelling as a storyteller.

Searching and vulnerable, with only an acoustic guitar and nostalgic memories to defend her frailties, the song crystallizes in one moment what makes Spicer so special: she’s tangible enough to touch, and honest enough to believe.

About Amilia K Spicer: Amilia K Spicer’s latest album is Wow and Flutter, which is Spicer’s third release. It landed on many year-end best-of lists for 2017. Despite the acclaim, Spicer retains an underground mystique to her, perhaps due to her “don’t fence me in” attitude (also the name of her record label).  In addition to performing, Spicer spends time traveling (recently to Tibet and Bhutan), showcasing her photography, and directing/producing indie films.

Throughout 2018, Spicer performed frequently in the Americana festival circuit. She wowed fans with a full band set at the Kerrville Folk Festival in Texas, as well as the Woody Guthrie Folk Festival in Oklahoma. Furthermore, she’s performed more intimately at venues across the US, including 30A Songwriters Festival in January.