Eli Tidmore: “After Hours” thrives off its groove!

Eli Tidmore is singer-songwriter and independent artist from East Texas. A multi-talented instrumentalist who influences include, The Beatles, John Mayer, Claude Debussy, Frank Ocean, Phlake, Jerry Jeff Walker, and Kanye West among others. Tidmore’s latest 2019 release, is the single “After Hours” which follows his previous 2017 album “Chameleon”. When Tidmore is forging the breeziness of jazzy soul, and setting it to the rhythms of contemporary indie pop, as he does on this song, he is on firm footing. As solid a one-man band as he is, he has a good grasp of when to introduce soulful instrumentation too. Mostly that’s the jangly clean guitar riffs, and the piano lines which are plentiful through the record, although the surprise appeal is that sassy sax solo towards the end of the song.

The mid-tempo jam comes off a whole better than it sounds here, usually by virtue of Eli Tidmore’s memorable vocal performance. His sticky hooks and clear unfolding of thematic elements enhances the narrative department, while Eli capitalizes on expanding his instrumental boundaries. The determined vibe presented through the shimmering piano chords and finger-snapping melody makes the message of “After Hours” seem plausible.

Eli Tidmore definitely took a step forward artistically with this single. There’s sprinkles of ambition and ingenuity all throughout “After Hours”. The song is a ‘true-to-self’ composition and plays to his artistic and musical strengths.

Clearly, this perfect-pitched, golden-voiced singer is on an upward trajectory, sounding even more authentic than he did on his album. The record benefits from its quick-paced, rhythmic melodic lines, groovy, yet balanced production, and most of all, a catchy chorus.

On the verses, he addresses his desires, as well as insecurities and relationship issues.  Authenticity and honesty go a long way for Eli Tidmore on this track. Eli shows how he’s expanded as an artist, as the production moves beyond the safety of his 2017 album. 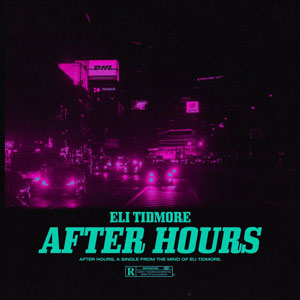 “After Hours” features funky, soulful production which thrives off its groove and complements the airy nature of Tidmore’s voice exceptionally well. Vocally, he continues to be more compelling, and certainly possesses an enviable tone.

Eli sounds terrific, never over-singing, delivering a balanced, nuanced vocal performance. He thrives off of the feel-good groove, not to mention other production elements. Also give him credit for exhibiting personality and charisma, while embracing urban contemporary music.

Brisk and breezy, the track is indicative of a turning point in the talented musician’s career. With heavenly hit notes and irresistible phrasing, beat and groove of this track has the foundation of a classic.

So mellow, so sensitive, and so stylistically smart, Eli Tidmore sounds present, active, and alluring on “After Hours”, and will help you set up a certain mood if need be. His self-assured songwriting shows an artist clearly capable of making effective and catchy pop songs on his own terms, using smooth brushstrokes of the contemporary pop formula and an organically grounded mindset to the core of his writing.

Fuhlen Records Presents: Hugo Kidd – “You Can Save Me”