Sometimes, it’s an unlikely collaboration that can be truly ear-catching for an artist. “Breaking Up”, which pairs producer Lyndon Rivers with singer Rachel Clark is a perfect example.  The production...

Sometimes, it’s an unlikely collaboration that can be truly ear-catching for an artist. “Breaking Up”, which pairs producer Lyndon Rivers with singer Rachel Clark is a perfect example.  The production work is a selling point, successfully mixing keyboards/synths, and a killer, stomping beat. Clark sings about making painful decisions, fueled by the heart and her experiences. She does so with solid vocals, sounding clear, and backed by excellent vocal production. Eliminating any melodic predictability is the harmonic synth contrast to the vocals. The line is much more smooth-flowing, and less rhythmic than the vocal verses.

Regarding the production, “Breaking Up” fuses pop, electronic, and even elements of the urban contemporary script. Is this a deep, profound record? Perhaps that’s what Lyndon Rivers is aiming for in concept, and in realization, but he predominantly allows it to be enjoyable enough for you to get onto the dancefloor. That’s the prerogative of EDM, ladies and gentleman. 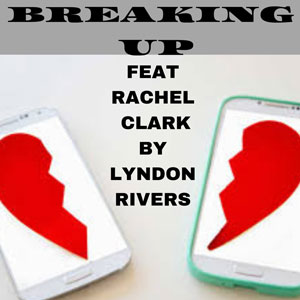 Nonetheless, Rivers spoils the listener with a cool bass line. What can’t be denied is the power of the groove and danceable nature of the record.  Rivers proves that there is more to his dance sound than simply stuttering synthesizers. It is said that the true sign of a legitimate artist is their willingness to takes risks, and that’s River’s calling card.

“Breaking Up”, is a concise dance record, clocking in on four-minutes, but it’s chocked-full of energy and intensity. As always with Rivers’ productions, the track naturally has an edge about it, which bodes in its favor. Benefiting from rhythmic synths during the verse, as well as the malicious, utterly cheeky, playful synths during the bridge.

All-round, the production is bright and exuberant, while Rachel Clark dabbles in skepticism: “Can’t put my finger on the feeling that you give me. Gonna sit down and figure out the reason why you feel so bad.” As interesting as that lyric is, perhaps the key lyric is: “Breaking up, breaking up, breaking loose from this painful healing.”

Basically, the song focuses on an afflicted relationship and the liberation there from. While Clark matches the energy and intensity of the instrumental that accompanies her, the greatness of Lyndon Rivers’ instrumental still trumps everything else. If you’re a Rivers fan, you’ll be onboard with this one.

By this time in Rivers’ career, it’s clear that his sound has matured, developing far beyond the type of music that is suitable just for a DJ set. With each successive listen it becomes more apparent; every single note has a purpose, every snare hit and synth squeal was methodically placed and painstakingly produced. Even the vocals have been toiled over – worked, cut and placed, and then re-placed again.

There is an undeniable feeling of intent, an intangible sense that Lyndon Rivers has once again completely poured himself into the production of “Breaking Up”.

Heathcote Hill: “Save The Ones You Love” goes someplace beautiful!

Elishaua: “Innocent” is a more than impressive project