Altamina – “Take Over The Sea” has sonic treats scattered throughout

Montreal, Canada based band Altamina, recorded and mixed their last album, “Tomorrow Morning Will Be Tonight”, with Howard Bilerman, whose credits include Arcade Fire, Handsome Furs, and Wolf Parade,...

Montreal, Canada based band Altamina, recorded and mixed their last album, “Tomorrow Morning Will Be Tonight”, with Howard Bilerman, whose credits include Arcade Fire, Handsome Furs, and Wolf Parade, among others. The band, who now have their own studio, have capitalized on their previous experiences, mixing and producing their latest single, “Take Over The Sea”, completely by themselves. It is their first release since 2016, and will be part of an upcoming EP set to release later this year.

Talking Heads mastermind David Byrne once wrote about the mechanisms of music making: “What begins as a random walk often ends up taking you somewhere, somewhere that you later realize was exactly where you wanted to go.” This rationale roughly explains the genesis of the song, “Take Over The Sea”, which starts on an understated moody note, and then mutates into overdriven, fleshed-out euphoria. 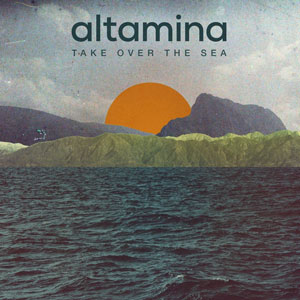 Altamina’s creative four-year lapse between releases have rewarded them a flawless comeback that few of their contemporaries can boast. “Take Over The Sea” is undoubtedly one of the most captivating and atmospheric indie-rock songs of the new year so far.

It’s an unusual song. Rhythm is not it’s point of entry, nor does the melody quickly insinuate itself, and the most striking element of all is the subtle musical density—not that this is a heavy-sounding record – at least not until the end – just that there’s a wonderment of stuff going on during the track: there are sonic treats scattered throughout.

There is the sense that Altamina and the production display a remarkable level of musical invention on “Take Over The Sea”, because before too long, and without consciously noticing it, there is a powerful rhythm pumping the undertow, while the melody builds and soars rather audibly in the foreground.

Not surprisingly, the jangle and crunch of the guitars are not too far behind, and soon creep up on you with conviction. This totally unwinds the song, which at that point will benefit from as much loudness and fidelity as your sound-system can muster.

“Take Over The Sea” is resonant, thoughtful and sounds deeply committed. The song flirts with elegantly creative song-writing that first builds its foundations on mesmerizing introspection, before succumbing to near-danceable melancholy.

Stretched across 4 minutes 20 seconds, its riches can be hypnotizing, given the song’s deceptive complexity. The track is a product of sheer musical and production virtuosity, as each subsequent play will make very apparent.

As “Take Over The Sea” sinks into your head, revealing itself to be cathartic, lavish, and propulsive, you realize how much it marks a natural progression for Altamina, who somehow still remain eminently accessible and tuneful. This far exceeds the current standard of mainstream radio fare, with ease.

D.B Melly – “You Are Here” is the perfect balance between bars and introspection