Mbarz – “Rain Drops” is an impressive and powerful record

Coming from the cultural melting pot of Berlin, Germany, Mbarz arrived at his rapping destiny at the relatively late age of 31. Arriving late, doesn’t mean that he arrives...

Coming from the cultural melting pot of Berlin, Germany, Mbarz arrived at his rapping destiny at the relatively late age of 31. Arriving late, doesn’t mean that he arrives unprepared however.  On the contrary, Mbarz sounds like a veteran from hip-hop’s golden age. He’s on fire when it comes to his rhymes and flow and sounds even more confident and powerful than many of his contemporaries and peers. Listening to his single “Rain Drops” is a lesson in how to execute a classic sounding hip-hop track in 2020, creating a memorable song that pays tribute to the art that is hip hop in its many forms while ignoring any new trends but still sounding vital, which is a true skill. 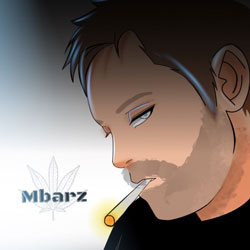 Mbarz explodes out of the gate on the energetic “Rain Drops”, backed by a driving but melodic production. The track shows Mbarz literally as hungry as they come, as he spends exactly three minutes devouring the wack emcees currently representing the genre.

The fearless emcee unleashes impacting verses – covering his substance abuse and his grind – wrecking the cinematic backdrop with numerous quotables and emerging from the destruction triumphantly. Just as he did from his addiction, now being 7 years clean already.

“Rain Drops” offers a musical epiphany for listeners as Mbarz allows them to partake in his intimate thoughts for storytelling mural, easily painting himself among the underrated when it comes to hard-hitting narratives.

Lyrically, Mbarz is a force throughout the track, bombarding the beat with an insistent flow and momentum. He also possesses an excellent ear for beats, selecting an excellent backdrop here for his rhymes to run rampant over. 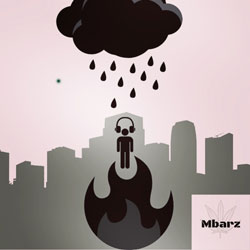 There’s a rather recurrent stigma in rapping where if you’re to tell a story, you have to sacrifice some lyricism for the sake of clarity. Paying no mind to that, Mbarz balances lyricism and narration straight out the gate with “Rain Drops”. There’s nothing lost on the record. Mbarz comes through with passion on every verse, taking steps outside of his comfort zone as a spitter without sacrificing any lyrical bite.

While initial musical vibe is enthralling, with an artist like Mbarz, it’s more exiting to sit down and listen closely to the bars he’s dropping on the track. The most impressive thing about “Rain Drops”, is Mbarz insistence on opening up his psyche, and his skillset as a true spitter, and a story-teller.

His raps are detailed, as he crams as much information and rhymes into his musical bar. The rapper’s confidence is exuberant on this ambitious endeavor. His bravado undoubtedly adds a great atmosphere to a well-crafted track. Mbarz delivers an impressive and powerful record with “Rain Drops”.