Aldrovanda is a newly formed alternative rock band from Stockholm, Sweden. Launched less than a year ago, the band is made up of Sanna Wallin on vocals, Gustav Björk... 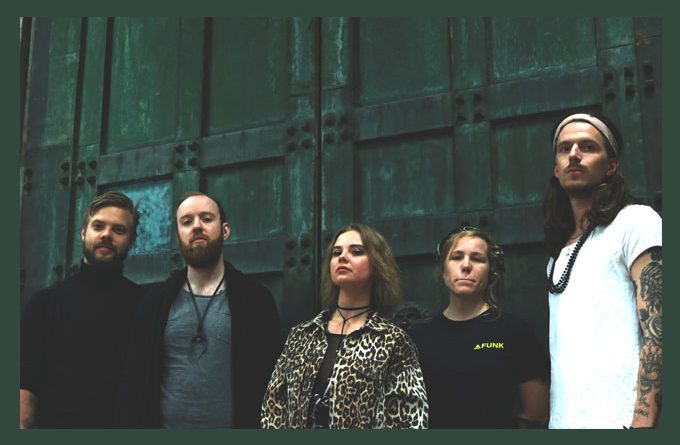 Aldrovanda is a newly formed alternative rock band from Stockholm, Sweden. Launched less than a year ago, the band is made up of Sanna Wallin on vocals, Gustav Björk and Rebecca Mardal on guitars, David Schlein – Andersen on drums and Jacob Ryding on bass. The band is currently promoting its single “Touch”. The successive sound is, fittingly, a rocking and rhythmic one. Guitars, bass, and drums all share the traits of the dynamic momentum; together they feel like a series of incredible scintillating sparks fluttering across the song. The banging drums that infiltrates the track merge with the chugging guitar riffs to form a pattern of pulsing, primary colors. It creates a bright, animated drive.

The sound on “Touch” is crisp, every layer discernible, eschewing the blurs and muddy reverberations that constitute traditional rock production and instead drawing from the separations that characterize modern high-tech alternative rock. As much as this approach could be credited to the drummer, whose beats alternately prop the song up at acute angles and melt into dense fills, the twin guitars and bass do just as much, climbing in perpendicular fits throughout the song.

The song’s qualities are both musical and vocal, so that singer Sanna Wallin, instead of shouting over a flood of guitars, is responding to, and weaving her way around, the overlapping riffs and rhythms. What other bands would consider peripheral details and embellishments are central to Aldrovanda compositions.

It’s a vivid sound-world, where the guitars encase the singer’s voice in a series of cosmic explosions. “Touch” is an impressive record, which communicates the idea of Aldrovanda as an alternative rock band and allows them, by exploring every shade and nuance of their identity, to become unmistakably themselves.

The song establishes the band as having an arena level sound – the pumping choruses are infectious, and you can imagine the fists-in-the-air machinations escalating with every passing vocal chant. “Touch” is extremely marketable and overflows with an earworm melody and catchy hooks at just about every turn.

This song will get stuck in your head for days. It will get you singing along in no time. Aldrovanda bring a serious, real and epic sound. Lyrically, vocally, and musically, they will absolutely blow listeners away. Vocalist Sanna Wallin’s pitch-perfect emoting is a constant draw, swinging effortlessly between sexy cooing and ultrasonic excitement, while the guitar duo of Gustav Björk and Rebecca Mardal, are able to shift smoothly from gritty riffs to epic escalating tones.

When taking the journey with “Touch”, be ready for charismatic, dynamic vocals and a tight, bold alternative rock sound behind it. The song is a prime example of the devotion put into every moment Aldrovanda spent writing, performing and recording, what they leave the audience to hang onto here.

“Touch” is a song that the band will be able to look back upon with confidence, knowing that they gave it their all, and then some. It’ll be interesting to see what Aldrovanda do next.

Heartour Releases The Single, “Brain”, from The Upcoming Album R U IN