The Silver Bayonets – “Awake” – a distinctive bang and a biting sentiment!

The Silver Bayonets are a London-based indie-rock band, fronted on guitar and lead vocals by songwriter Kabir Sheikh, and featuring Gen Ding (guitar), Ross Guy (bass) and Enzo Cuticchia (drums), all of whom add backing vocals. Their self-recorded debut album, ‘The Pain Inside Your Head’ (2015) was well received by critics and fans, which led to their sophomore release ‘Braveface’ (2018), produced Dave Draper. The band’s third album, ‘Unfolding’ (2020) is also produced by Draper, and contains the lead single “Awake”.

Following on from their previous release, this new single, is evolution rather than revolution, taking the trademark dynamic explosiveness of The Silver Bayonets and building on established motifs and sounds. They return on a high with a striking piece of work which cements their position as leading indie rock torchbearers.

Kabir Sheikh has the knack for putting plenty of hooks and twists into his tracks, and it’s his songwriting that is so effective and what makes them work so well. Of course great songwriting without a great band to execute the song, won’t get the track get.

Thankfully The Silver Bayonets have long since set a standard for how to combine gorgeously profound songwriting with lethal and enveloping sonic auras driven by sharp and crunchy guitars, pulsating basslines, and slamming drums. There are enough exhilarating moments to excite even those not easily pleased.

The Silver Bayonets seem to have found themselves channeling a rich vein of form to deliver a track that encapsulates everything they have done so far. Moreover “Awake” possesses enough distinctive bang and biting sentiment to captivate the most insensitive ears. 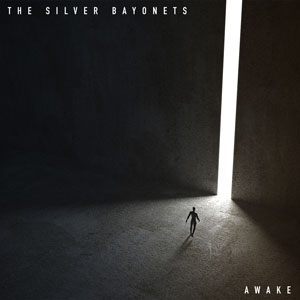 “The daily trials everyone goes through. Hit so much harder when they happen to you. So we all need something – anything to ease the pain,” sings Kabir Sheikh. Cuticchia’s drumming is peerless, while Kabir wrings every amount of emotion through the song. Ding and Guy add an exciting edge and a funky twist to the proceedings, with fantastic performances all-round.

This is the sound of a band energized to the hilt, despite the dark lyrics. The quartet’s fundamental identity remains marvelously engaging and zealous. “Awake” is a great addition to The Silver Bayonets catalogue, showcasing the increased muscularity and maturity of their musical arrangements.

Offering a contemporary lyrical theme that takes up the disintegration and the undoing of the harmonic mechanisms that move the world. “The song is about slowly realizing that there’s something wrong with the world and starting to question it….it’s also about what you’re going to do about it!” questions The Silver Bayonets.

“Awake” is simply brilliant, in its conception and execution. The song is captivating, with performances that demand attention and should be essential listening for any avid indie or alternative rock fan. The Silver Bayonets have made a statement that after all the successes of their previous releases, they are just getting started.

Introducing the brand new single: ‘Never Have I Ever’ by J-Killa