Born in Philadelphia, Pa, songwriter and producer, Jared Johnson officially entered the music business as a professional songwriter and music publisher in 1998 affiliating with BMI. He began musical...

Born in Philadelphia, Pa, songwriter and producer, Jared Johnson officially entered the music business as a professional songwriter and music publisher in 1998 affiliating with BMI. He began musical training at the age of 8, studying piano. He steadily augmented his musical education throughout his school years, adding the clarinet and saxophone to his repertoire of talents, and played in the Moorestown, NJ middle school band and orchestras. Talking Book Featuring Jared is a studio project he formed in January of 2020. Jared derived the name from the first commercial album he ever purchased, which was “Talking Book” by Stevie Wonder. The album introduced him to the concept of a songwriter/producer style and concept, which was further enhanced by studying the works of the legendary producer Quincy Jones.

It was with this template in mind that Talking Book Featuring Jared set about recording and releasing his original music. Over the years he’s worked on various projects, in the Gospel, R&B, and Smooth Jazz genres, with artists such as Babbie Mason, Yvonne Lewis, Gabbie McGee, Sam Salter, Mr. Jonz, Michael Anthony and Sam Skelton.

Now Talking Book Featuring Jared takes yet another step forward with his brand new single, entitled “Like The Wind” featuring a young male vocalist known as DAVY. The track is taken from an upcoming R&B and Soul album, titled “SONGWRITER”. 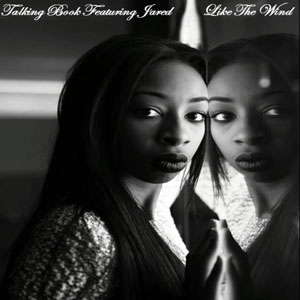 “Like The Wind” showcases what Jared describes as “a stripped down socially distanced piano/vocal production style. At a time when Svengali producers are ascendant in EDM, Pop, Rap and R&B, with this song, Talking Book Featuring Jared serves up a producer’s reminder that it’s human performance and the song, not simple studio gimmickry that matters most. Wonderful musicality says an awful lot on its own, and the high points of “Like The Wind” are brimming with it.

The song is a bracing, soulful, and potentially influential amalgam, in which Talking Book Featuring Jared weaves sparse, reverberating piano motifs, and mellifluous harmonies, around and under the deeply resonating melodic juice, that singer DAVY is able to squeeze out of his enchanting tenor cords.

Echoes of R&B and Soul thread themselves through a powerful aura of Gospel vocal nuances. Talking Book Featuring Jared shines with his ability to make a human voice sound this enticing. Even with the emphasis on DAVY’s voice and the harmonies, Jared leaves room for the piano to gently fire up the emotions.

In a field where singers tend to gush forth in showy demonstrations of vocal gymnastics, DAVY sticks to the song at hand. On “Like The Wind”, he applies note-stretching filigree judiciously, not needing histrionics to impress with a superb range that goes from honeyed cooing on high notes, to firm and soaring chest-tones in moments that call for a declaration of deep inspirational sincerity.

While we are here, it’s a good idea to study the chorus for counterpoint mastery between the lead, the background vocals, and the piano riff. It is such a tight piece of writing, arranging and producing with flawless execution.

Overall “Like The Wind” is a treasure trove of skills sets. It takes a few listens to fully grasp the source of the slow-burning groove, the choice of volume balances in the mix, the melody structure, the chord progressions, and the vocal arrangement, and to connect it all to the heartfelt narrative. We need to pay attention to Talking Book Featuring Jared.

Damian Gaume – “I’m Nothing” rocks hard and has a striking message!

Mallika Mehta – “Way Too Long” – an undeniable talent to be reckoned with!