“The Lights Complain” – another superb entry into Swami Lushbeard catalog!

After a one-year run of critically-acclaimed singles, which include, “#Enemy,” “All About You,” and “The Truth”, L.A. rock band, Swami Lushbeard once again prove why they are easily one...

After a one-year run of critically-acclaimed singles, which include, “#Enemy,” “All About You,” and “The Truth”, L.A. rock band, Swami Lushbeard once again prove why they are easily one of the finest, most dynamic underground bands that are currently gracing the genre, with their intense, insightful, and perfectly orchestrated new single, “The Lights Complain”. Every fan of forward-thinking rock that retains all the classic elements of the genre, should own this single and keep it in rotation. Swami Lushbeard sound like the torchbearers for exciting, heavy, innovative, melodic and clever progressive rock with alternative and classic twists.

Swami Lushbeard has moved towards the ever-increasingly complex-yet-accessible territory, embracing both retro and modern, as their sound becomes a perfect mix of vintage and contemporary. On “The Lights Complain” the band’s technically-inclined music unravels itself straight away. The song excellently written and paced. Its brilliance, however, lies in the way it nourishes the atmosphere in production and execution.

It’s just motivating to hear a band play to the absolute limits of their abilities. What starts with a piano-driven intro, explodes into a milieu of sonic hysteria, as the lyrics tackle the “self-centered adulation that reflects our society” and “takes you into the grim world of current-day culture so deeply self-involved that even the lamps overhead are shining just for the people below, illuminating an ignorance and comfort that runs far too rampantly…” 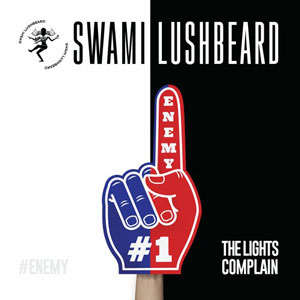 The symbiosis between the musicians in Swami Lushbeard, allow them to present their increasingly demanding thunderstorm of riff, solos, melodies and polyrhythms with the nonchalance of a perfectly intertwining conglomerate, leaving nothing to be desired by critics and fans alike.

Filled to the brim with ideas, there are countless of little details to be discovered here, while the soaring vocals continue to hugely contribute to the rhythmic dimension that has become ubiquitous to the band’s sound.

The stomping beat stands next to powerful vocal melody, expressing the narrative’s desire to be heard. “The Lights Complain” introduces what can only be described as a rollercoaster ride through steamrolling guitars, shattering keys, and thunderous drumming. Until the energy and complexity reaches a head-spinning level.  Every note seems to be thought over multiple times, every single hit on the drum is in its place for a reason.

All the while, Swami Lushbeard still manages to soak the music with ear-catching melody and harmony. Not only does “The Lights Complain” excel as an original composition full of compelling moments and seamless transitions, but its lyrical references are equally pertinent and impacting.

There can be no doubt that this new single, is another superb entry into Swami Lushbeard catalog. It improves upon virtually everything that gave their previous work its identity, while also feeling very much like an extension of it.

“The Lights Complain” follows the arc that the band has been traveling of late, and showcases precisely what makes Swami Lushbeard such a wonderful musical project, and also why so many superlatives are often thrown their way. This single is now the fourth release in a row from Swami Lushbeard that lives easily among the output of their most esteemed peers.