If you come to the “Orange Juice” album, by Florida project Cadaver Cable, don’t come looking for extravagantly epic instrumentals, desirously high-riding vocals or wildly bombastic dancefloor rhythms.  Formed in 2019, Cadaver Cable deliver everything, except the aforementioned elements. The album is described as being made up of “2am compositions, phone voice memo recordings, twenty-dollar keyboards, sore hands, and stubborn, desperate determination to leave some kind of musical mark on the world.” Which exactly what it sounds like, and what it does. Sometimes a collaborative project, on this album, Cadaver Cable operated with sole input of project leader, Arthur.

Another noteworthy aspect, is the fact “Orange Juice” is a charity album, as all proceeds is going to The Trevor Project in honor of pride month. This project is dedicated to serving and supporting young people within the LGBTQ community. So what about the music? Well, even above its emotional range and its appreciation of the alternative music tradition, what really makes “Orange Juice” outstanding, is Cadaver Cable’s ability to pull out quirky melodies and evocative words so consistently.

“Orange Juice” showcases Cadaver Cable as a great songwriter come into his own and putting forward his own album, worthy to stand in the pantheon alongside the bands that inspired him – at least as far as bold originality and fearless creativity stands. Musically, Cadaver Cable has been largely inspired by Joy Division, the Mountain Goats, Rozz Williams, Martin Gore, and Daniel Johnston. “The Catholic Church, being transgender, and the taste of antidepressants,” completed the overall aesthetic, it is stated.

The album creeps up on you slowly, with brilliant lyrical pokes you’re not really expecting to find in the sad-sack nature of many of the songs. I say “sad-sack”, because regardless of any song-topic or theme, the lead vocals seem to harbor a subtle melancholic flavor which inhabits and haunts each track – even when there are evident giggles and grins. And eventually, is what keeps you locked into these idiosyncratic songs.

At times, the moody atmospherics underlining the songs amount to no more than mere words; other times they become another instrument, pushing the tracks along. These sonic textures add haunting rumbles, fleeting bursts and the occasional melodic upswing. Predominantly, these songs are intimately personal reflections, where languid, low-key and shadow-like soundscapes rise up to the surface challengingly. 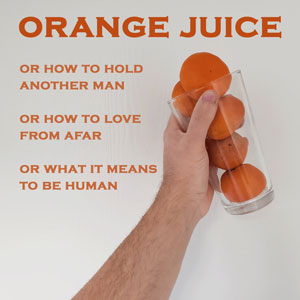 Above all else, Cadaver Cable is a great, outspoken and poetic lyricist, as well as being a master storyteller. These qualities are immediately showcased on the album opener, “Going to Tampa”, and beautifully illustrated on “Doorstep”: “I linger in your doorway. Much too scared to say goodbye. There’s a laugh in your smile. Always my reflection in your eye.” But he also knows how to sarcastically poke burning holes in stereotyping, which he displays in “Cowboys”.

In this song he states:” Cowboys are usually gay. Don’t ask where I got that info. I don’t care what you say. I only care what I know.”  And then astutely qualifies that statement with: “Lil Nas X was a cowboy. Brokeback mountain too. If you don’t argue with me on this. Then I won’t argue with you”. But you could press play on any track on this album and will that it contains extremely impacting lyricism.

Particularly profound is “Orange Peels”: “Men like us are made of orange peels. Held tightly over the compost bin. Unpeeled in these shower stalls. And whatever hell you leave me in. Men like us are rotting from the inside. There are dust mites in our eyes. We hang up a model crucifix. Then go watch the falling skies.” The album contains 12 songs, which lyrically will captivate you until the end. Moreover, the relatively short runtimes of each, ensure that none of these tracks overstay their welcome.

Cadaver Cable plays with a range of quirky styles, instrumentation, lyrical themes and production techniques, splattered across songs mainly about Florida and gay love – all the while maintaining a sense of utter wholesomeness and profound introspective honesty.