Saint Thomas X – “Mars In Your Eyes” borders on the spectacular!

“The most brilliant artist no one’s ever heard of,” is a phrase you’ve probably heard from time to time. This maxim certainly applies to painter, poet, vocalist, bass player,... 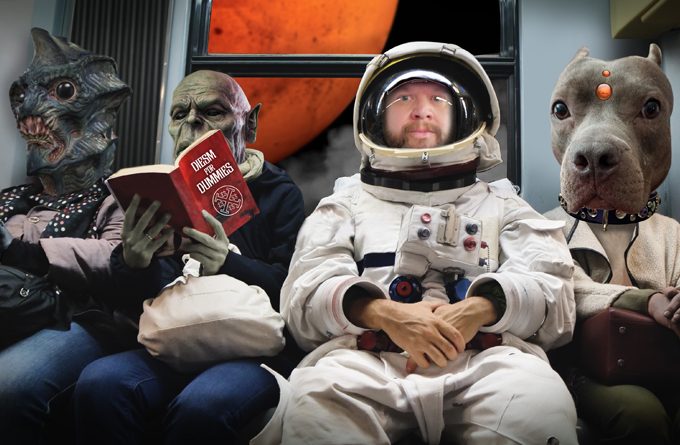 “The most brilliant artist no one’s ever heard of,” is a phrase you’ve probably heard from time to time. This maxim certainly applies to painter, poet, vocalist, bass player, songwriter, lyricist, producer, author and digital artist, Saint Thomas X, out of Austin, Texas. And here’s why: “I don’t have designs on accolades, fortune or fame. It’s not why I create. I write to share stories and record to catalog my songs. I’m not interested in show-business. Performance art is for extroverts, entertainers and social trade musicians who crave adoration and human interaction. I enjoy the catharsis of writing alone and the control of recording with as few people as possible. So I do that,” states Saint Thomas X, rather convincingly.

The previous statement may seem like a contradiction, considering that producer, vocalist and songwriter Saint Thomas X, has played and recorded with members of: Black Pumas, Cowboy Junkies, Bare Naked Ladies, Midnight Stroll (feat: Aaron Behrens of Ghostland Observatory,) Band of Heathens, Bob Schneider and En Minor (feat: Phil Anselmo of Pantera and Down.), but then we need to understand the context of those performances and recordings.

The one clear undisputable fact, is that Saint Thomas X is a formidable musician and songwriter. And his 7th album, “Mars In Your Eyes”, proves that without any shadow of doubt. The quality of playing, the recording, the songs, and the technical dexterity is huge. The overall instrumental tones, and the vocals as well. The guitars hit like a brick, and the drums are so dynamic and well recorded. 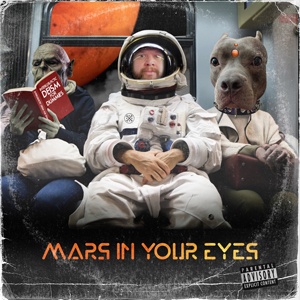 This is an album that wittingly, or unwittingly, plays homage to pretty much any other rock music era you can think of –from the 60’s to the 90’s. “Mars In Your Eyes” is all-embracing, and you will hear anything, from songwriter tones to classic rock vibes and progressive arrangements. Whatever you think your tastes in rock influenced music are, Saint Thomas X has pretty much got you covered.

Saint Thomas X technical ability is right up there, but unlike a lot of highly technical creators, there’s always music at the root of everything he plays and writes. There is always something very, very special about truly outstanding musicians, and every track on this album borders on the spectacular. It also sounds absolutely stunning on a hi-fi system – and played loud, quite amazing too.

Some might consider these aforementioned statements an exaggeration, but Saint Thomas X, without being afraid of showing his influences, mixes the past with the present in an outstandingly sophisticated way. And he does it from the opening track, “Antisocial Social Club”. Tossed somewhere between the soulful grit of Alice in Chains and the sophistication of Alan Parsons, Saint Thomas X launches the album with an epic soundscape, and the theme of homelessness.

The title song, “Mars in Your Eyes”, continues with the same rock n roll crunch, and a catchy Beatle-ish melody. “Swan Song Sung” recalls a little bit of Soundgarden, a pinch of Electric Light Orchestra, and whole lot of Saint Thomas X, in a song that marches to an insistent momentum, and an explosive guitar solo. “Haint Blues” is moodier and darker, and just as impacting as you would expect the Meat Puppets to be.

I usually hate throwing around resemblances and similarities, but in this case it is necessary to comprehend the scope and enormous range of Saint Thomas X’s creativity and performances. The album drives ahead relentlessly with “War of Wars”, before retreating a couple of notches on the poignant singer-songwriter styled “The Agonist”, “Deist of Burden” and “Transcendental Medication”. I could easily mention traces of  The Eagles and Merle Haggard here, but you’ll pick that up by yourself.

The album close down with the crunchy mid-tempo rocker, “Vanishing Eden”, which features another whopping guitar solo. All throughout this album, whether it’s a meticulously calibrated passage, or a mellow interplay between the vocals and rhythm section, “Mars In Your Eyes” transposes Saint Thomas X’s genius for composition and performance into a realm that he seems to have dedicated himself so fervently towards. I can only hope for more of the same quality in the future.

Have a “Goth Girl Summer” with Georgi!